During the construction of the Illinois Michigan Canal, one difficulty that the engineers encountered was crossing creeks and rivers.  The solution that used in 4 cases was the use of aqueducts containing the canal water over these natural waterways.  The westernmost aqueduct was built over the Little Vermillion River in LaSalle, Illinois.

Aqueduct over the Little Vermilion River

Aqueduct over the Little Vermillion River

The current version of this aqueduct is a riveted trough and steel plate. It was a replacement of a rusted structure. The replacement was built in the 1970’s by Lou Mahnic a blacksmith from LaSalle. He was aided by a group of union welders. The aqueduct is 140 feet in length and has 5 spans.
An account by a LaSalle resident shortly after World War 2 describes the aqueduct as a rusting metal structure.
In 1918, the U.S. government provided funds to renovate the western Illinois Michigan Canal. At that time, the wood trough of the Vermillion Aqueduct was replaced with a steel structure.
Currently, the aqueduct has sprung a leak. Water is leaking into the Little Vermillion River. dams are present on either side of the structure. The plan is to repair the structure this spring. 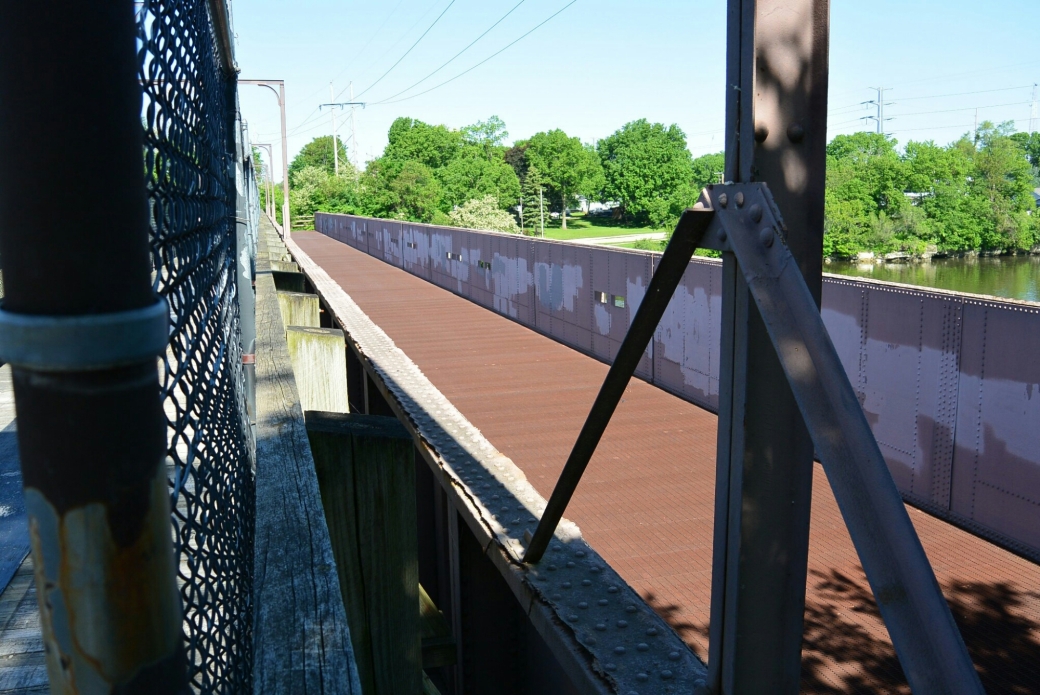 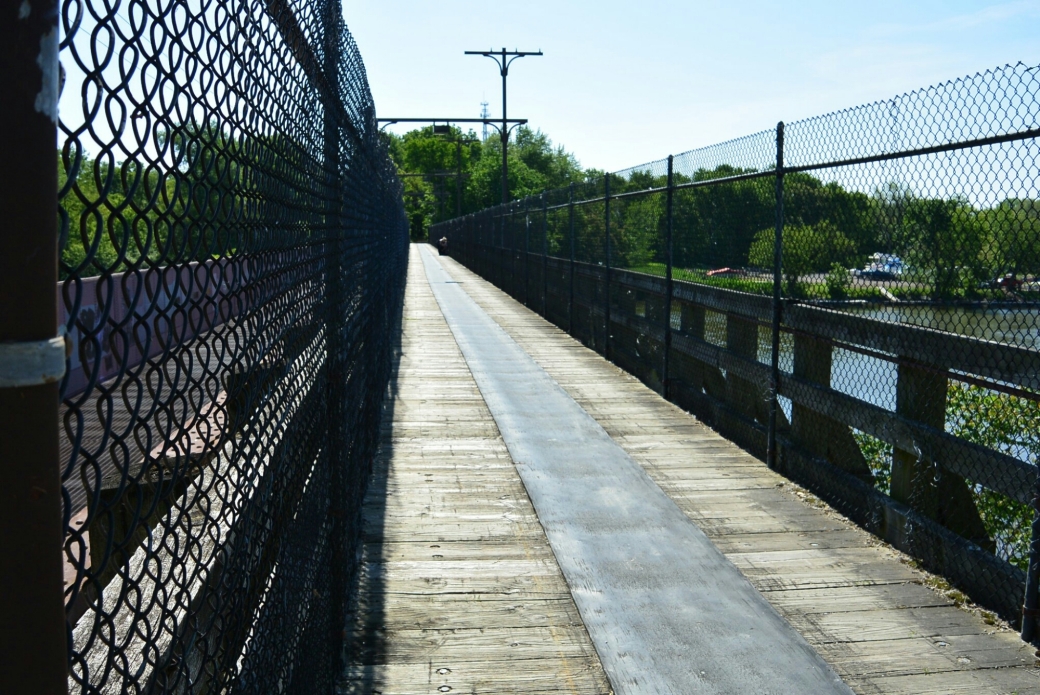 Traveling east on the Illinois Michigan Canal, there is no obstruction by rivers until Ottawa is reached. Here the Fox River is encountered. An aqueduct was proposed. The contract for its construction was awarded to David Sanger and Sons in June of 1838. He was an Ottawa resident. Mr. Sanger was no stranger to the business of canal construction. Previously, he had worked on sections of the Erie Canal and the Western Pennsylvania Canal. His son Lorenzo had worked on Lock 15 of the canal and the Joliet Penitentiary.
The original aqueduct consisted of a wooden trough and towpath supported by seven limestone piers. The piers were made with Joliet limestone. The aqueduct was the largest on the I and M Canal. It was 464 feet in length and 17 feet in width. The total construction cost was slightly over $100,000. In 1918, the wooden trough was replaced with a steel trough. Over the years, modifications and repairs were made to the steel trough and the limestone piers.
After 1870 when steam powered boats were used on the canal, the towpath along the aqueduct deteriorated. The area of the towpath was modified in 1903 to create a bridge for the Chicago, Ottawa, and Peoria electric line. This was in use until 1934.
Currently, the aqueduct is dry. 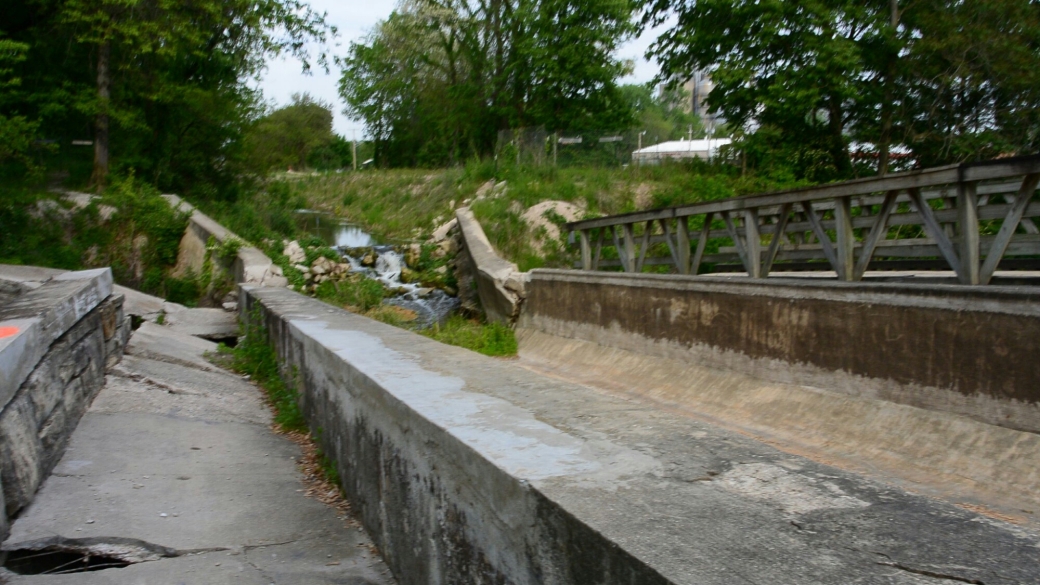 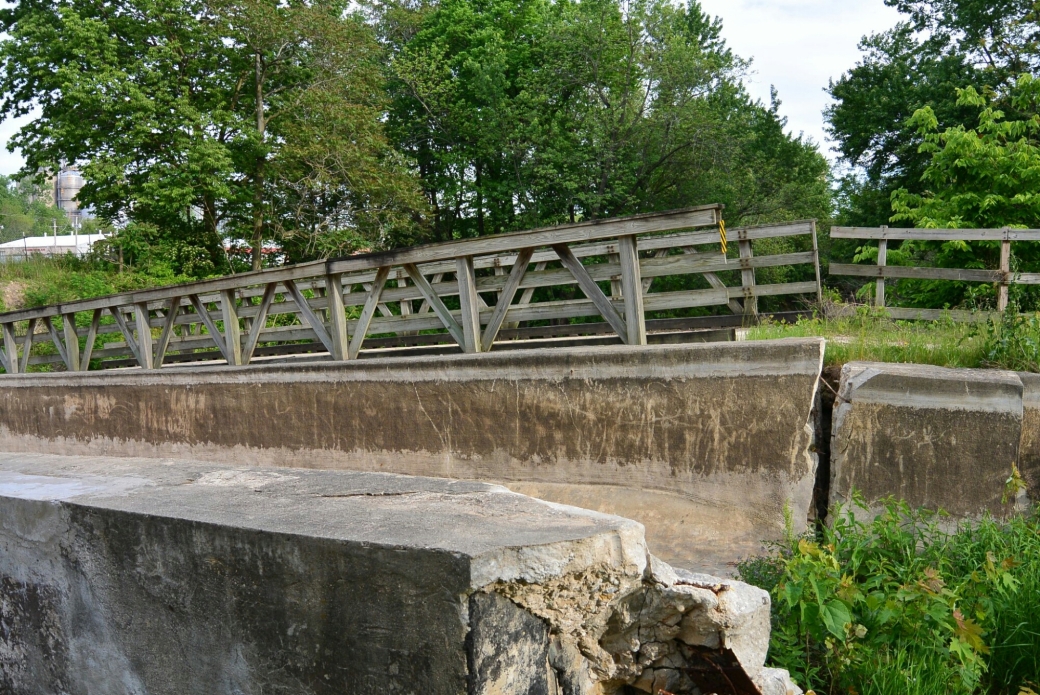 Travelling further east along the I and M Canal, the Nettle Creek Aqueduct is encountered in Morris. It was originally completed in 1847. The contractor was William Perce. The stone for the structure was quarried locally. Unfortunately, the red sandstone used was inferior to other stone used in canal construction. The aqueduct had to be rebuilt. The wooden trough was replaced with a steel structure in 1910. The aqueduct underwent many repairs 1850, 1859, 1868, 1877, 1889, and 1910. It was rebuilt by the CCC in 1937. It’s current appearance a steel plate frame to conduct the water in the canal. It is supported by cut stone blocks.
In 2013, an intense rain storm caused a collapse of aqueduct. As a result, this structure contains no water. The I and M canal is dry distal to the damaged structure. Unfortunately, the aqueduct has not been repaired as of this date (4/6/2016)
As we proceed farther east on the I and M canal path, the Aux Sable Creek and aqueduct is encountered. In the same area, Lock 8 and the lock keeper’s house are located. 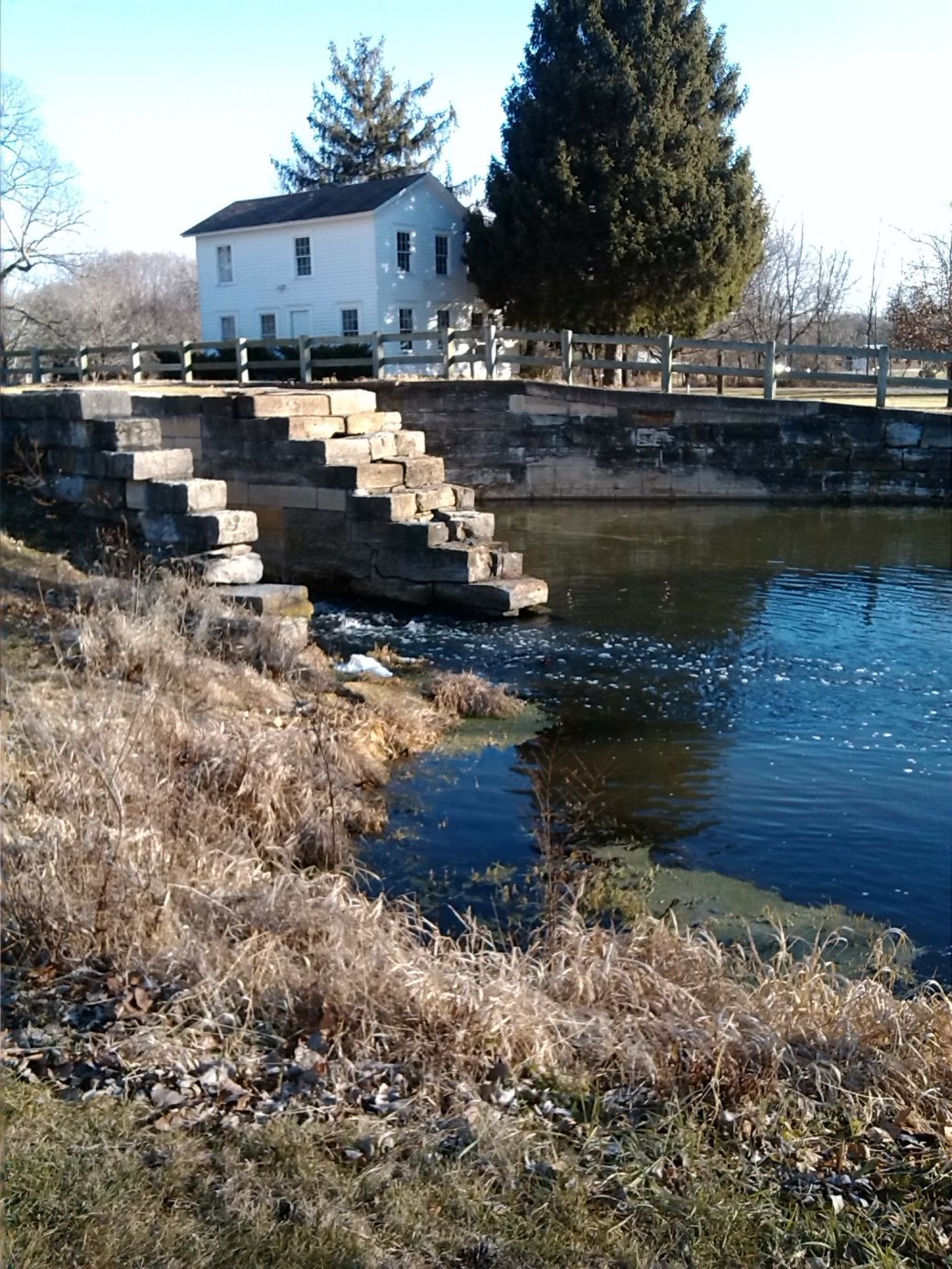 The aqueduct over the Aux Sable Creek was completed in 1847. It was 136 feet long by 18 feet wide. The original aqueduct was a wooden structure. It was supported by limestone piers. The wooden structure was replaced in 1927–8. It’s replacement was steel riveted plate girder. The support piers and abutments were repaired in 1948. In 1970, the towpath bridge was rebuilt. The aqueduct was again stabilized in the 1990’s