Jacques Marquette was born in Laon, France on 6/1/1637.  At the age of 17 he became a Jesuit.  For 12 years he studied and taught in Jesuit Colleges in France.  He was then sent to Canada to be a missionary to the indigenous native population.  He excelled in knowledge of the languages of the Indian peoples.  In 1668, he established a mission in the western great lakes region at Saulte Ste. Marie.  This was followed by a mission at Saint Ignace in 1671.
In 5/17/1673, he and Louis Jolliet and 5 men were chosen to lead an expedition to the mouth of the Mississippi River.  Marquette was the missionary; Jolliet was the lawmaker and explorer.
They traveled west to the area that is now known as Green Bay, Wisconsin.
They navigated the Fox River; portgaged to the Wisconsin River.  They reached the Mississippi River at Prairie du Chen.  They then navigated southward to the Arkansas River.   They stopped their exploration at this site when they received reports of Spanish Settlers in this region.
It was their intention to return back along the Mississippi River route. Native Indians at the Illinois River told them of a shorter route along this river and the DesPlaines River with a portgage to the Chicago River.  Jolliet returned to Canada.   Marquette and two companions stayed at Green Bay.  In the winter, the group camped in Chicago.

In the spring of 1675, Marquette and his party returned to the area near Starved Rock.   A bout of dysentery forced him to return home.  He died on May 18, 1675.
Marquette and Jolliet were pioneers in the exploration of the Illinois Valley Region. Jolliet was the first to propose a canal to provide for a continuous link between Lake Michigan and the Illinois River.

Exact site of death not known. 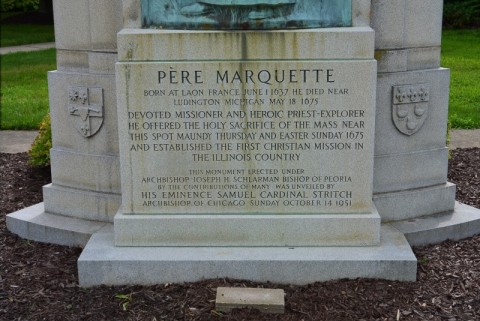