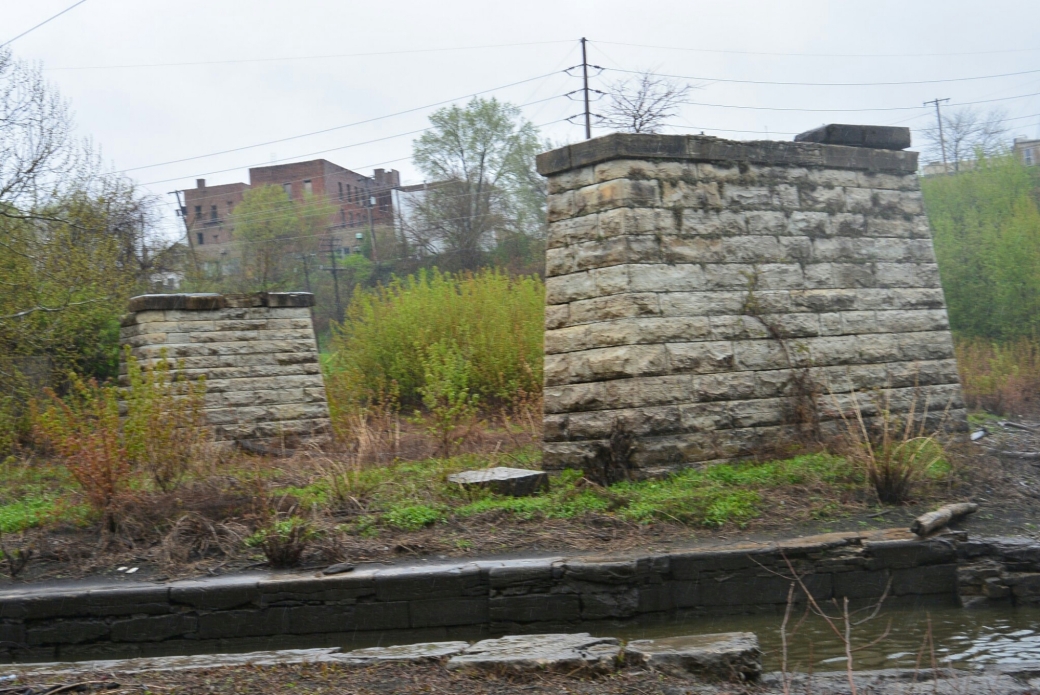 Remnant of the Burlington Bridge Over the I and M Canal LaSalle, Ilinois.

The Burlington began as the Aurora Branch Railroad. In 1849, it was chartered to build a line from Aurora, Illinois to a connection with the Galena and Chicago Union Railroad near West Chicago. In 1852, the name was changed to Chicago and Aurora Railroad. At this time, it was given authority to build a line to Mendota, Illinois where it junctioned with Illinois Central Railroad. On February 14, 1855, it was renamed the Chicago, Burlington & Quincy Railroad. By 1864, the railroad had over 400 miles of track all in Illinois. The track extended to Burlington, Iowa and Quincy, Illinois. In the same year, the railroad built its own line from Aurora to Chicago.
The railroad across Iowa was called the Burlington and Missouri River Railroad and was incorporated in Burlington in 1852. The railroad reached in Ottumwa by 1857; Murray by 1858 and reached the Missouri River in 1869.
In 1868, the C,B & Q built bridges over the Mississippi River both at Burlington and Quincy. These bridges provided railroad connections with the B & MR in Iowa and the Hannibal & St. Joseph Railroad in Missouri.
The B & MR continued building into Nebraska. As a separate entity–Burlington & Missouri River Rail Road in Nebraska, was founded in 1869. In 1870, it reached Lincoln; in 1872, it reached Kearney, Nebraska. In that same year, the Burlington consolidated with B & MR across Iowa. As the Missouri River Bridge at Plattsmouth was completed, the B & MR in Nebraska was approaching Denver, Colorado. That same year, Nebraska B & MR was purchased by the Burlington. The Burlington completed the line into Denver in 1882. This was the first direct rail line between Denver and Chicago.
The Burlington acquired the Omaha and South Western Railroad for access to Omaha. A line to St.Paul was built in 1866. In 1883, the Burlington gained control of the Hannibal & St. Joseph Railroad. In 1894, a line was constructed between Alliance, Nebraska and Billings, Montana.
In 1901, 98% of the Burlington stock was purchased by the Great Northern and the Northern Pacific Railroads. The ultimate mergers of these three companies would take another 69 years.
In 1909, the Burlington gained control of the Colorado & Southern Railway. This provided the company two additional routes–one between Denver and the Gulf of Mexico and a second one between Denver and Wyoming. Other extensions were made to the coal fields of southern Illinois and across the Ohio River into Paducah, Kentucky.
Beginning in the 1930’s, the Burlington became known for its passenger lines–the Zephyrs. These trains were powered by diesel locomotives and had stainless steel passenger cars manufactured by the Budd company.
The following is a list of the Zephyrs Routes:
Pioneer Zephyr– Lincoln–Omaha–Kansas City
Twin City Zephyr– Chicago– Minneapolis/ St. Paul
Mark Twain Zephyr–Saint Louis–Burlington, IA
Denver Zephyr–Chicago–Denver
Nebraska Zephyr–Chicago–Lincoln, Nebraska
Sam Houston Zephyr–Houston– Dallas/Fort Worth
Ozark State Zephyr–Kansas City–St.Louis
General Pershing Zephyr–Kansas City–St.Louis
Silver Streak Zephyr–Kansas City–Omaha–Lincoln, BE.
An Sat Ben Zephyr–Kansas City–Omaha–Lincoln, NE
Zephyr Rocket–St.Louis–Burlington–Minneapolis/St. Paul
Texas Zephyr–Denver–Dallas/Fort Worth
American Royal Zephyr–Chicago–Kansas City
Kansas City Zephyr–Chicago–Kansas City
Exposition Flyer– Chicago–San Francisco
California Zephyr–Chicago–San Francisco